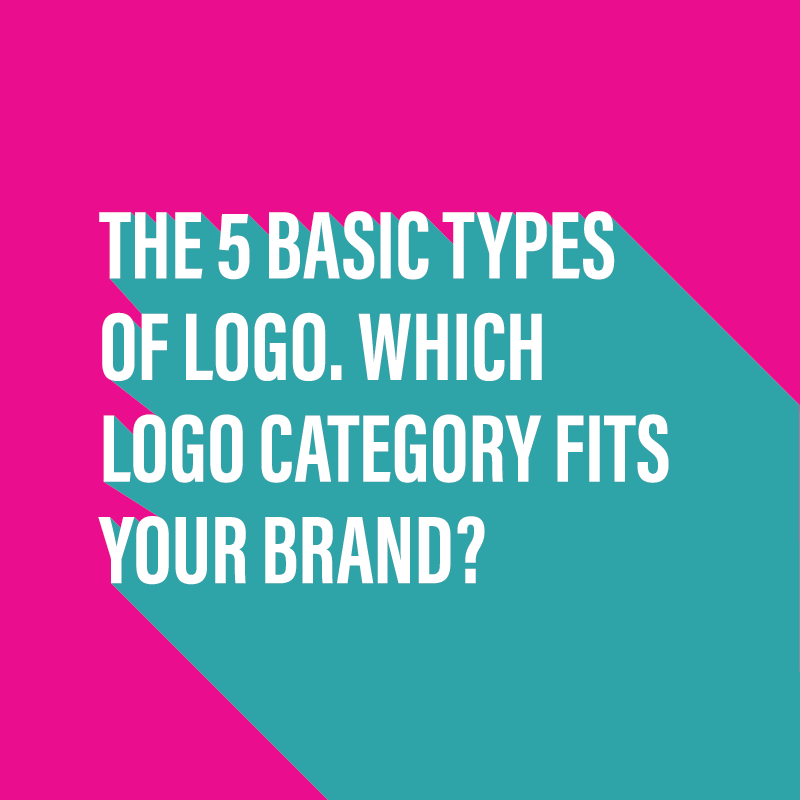 There is 5 basic types of logo or logo category. If you are looking to develop a new logo or redevelop an existing brand identity you really should know about these. I’m here to help you with that with my latest video. I’ll explain what each type of logo is and give examples of its usage so that you can make a more informed decision on the type of logo that you want to go for. Having this information will also make it much easier to discuss your plans with your chosen graphic / brand designer.

If you find the following video helpful, please head on over to my Youtube Channel and subscribe to be notified when I release new videos 🙂

Logos, logos, logos, so many of them out there. Did you know, though, that you can categorize them down into groups? There are different ways to describe certain designs of logos. I’m going to talk about them today or I’m going to explain to you the different types of categories.

The first category that you’ll have with a logo is the basic symbol or icon, iconic-type logo. This type of logo represents a brand in a simple, but bold and confident manner. In most cases, the image is abstract or stylized.

You’ll generally find these types of logos for large, large brands, brands which serve the whole world. The reason behind that is that if you serve the whole world, you’re going to be serving populations who have different languages, different traditions. You need your brand identity to be recognizable quite easily without having to understand words. Having a symbol or an icon is ideal for those types of businesses. Examples of those businesses would be Apple, Shell, Shell Oil, or the Nike swoosh. Those are all symbols and they work really well.

Next, we’ve got the word mark. Now, the wordmark is basically, what it says. The logo is made up of a word. In these cases, what you will find is that the brand will create their logo, but they’ll create their logo using a unique font. They will have a designer write the name of the business, but they will do it in a font that isn’t available anywhere else. That keeps uniqueness with that design. They won’t just jump into Microsoft Word and use Arial or comic sans, no, no, no, no. Examples of word mark logos would be Coca-Cola, Facebook, and eBay. They are all wordmark logos.

Next up, we’ve got the lettermark, similar to the word mark but a lot shorter. Letter marks will generally use the initials of a company. There could be a few reasons for that. It could be that the company’s name is really long and it’s just not going to fit well as a logo. It may be that the company’s name is quite hard to pronounce. As we said about the symbol, it may be that the company is a German company, has a long name and is quite hard to pronounce for people from other countries. What you do is you take the initials and you shorten them down. You make a logo from that. Examples of lettermark logos would be Hewlett Packard, HP, His Master’s Voice, HMV, and IBM.

The next logo category is the combination mark. Now, a combination mark utilizes a word mark and a symbol in one. You have the best of both worlds there. You’ve got adaptability. You could use the symbol on its own or you could use the word mark on its own. There is a danger, though. You would only really do that if you have a well-established brand and you spent a fair bit marketing your logo so that everyone knows what it is. It’s instantly recognizable.

Only then would you be able to really take these two separate elements and use them in their own situation because you’d have the confidence that people would know what it is. It gives you adaptability for different marketing situations, print, digital, screen, all that sort of thing. Examples of a combination mark logo would be Pizza Hut, Adidas and Burger King, three good examples there.

The last category of logo is the emblem. Now, the emblem is quite similar to a combination mark. You’ll have the company name and you’ll have a design, not quite a symbol, though. The reason it’s an emblem is that the company’s name is fully encapsulated within the design. Think of it more like a shield or a crest with a company name inside of it. Examples of that would be Harley-Davidson with the name fully in the middle bit with the shield, BMW, and Starbucks, three examples there of emblem logos.

If you’ve got any questions on any of these categories of logos, I’d love to hear them. I will make sure that I answer them. Just pop them into the comment section below. I’m looking forward to future videos. We’ll delve again deeper into logo design. We’ll also delve into brands and what brands are exactly, the elements that make up a brand. We’ll also look at more design. Thanks for watching.

I hope that you found the 5 basic logo types video useful and that it has helped to paint a clearer picture of logos and logo design for you.